Want to learn more about book history? We are going to be running a series of social media posts that feature the unique publishing history of some of the most famous books of our time. Keep an eye out and maybe you’ll learn more about your favorite book! This week we are diving into James Joyce’s Ulysses…
Arguably one of the most important examples of modernist literature, James Joyce’s Ulysses, which chronicles the life of Dublin’s working class through the lens of Homer’s epic poem the Odyssey, was the focus of censorship and accusations of obscenity in the early 20th Century. First serialized between 1918 and 1920 by the American journal, The Little Review, the novel was finally published in its entirety in February of 1922 by Sylvia Beach under the Paris imprint of Shakespeare & Company. Unable to find English printers, who feared prosecution for obscenity, Joyce’s work found its entry to the English market by way of Harriet Shaw Weaver.
Editor of The Egoist, a literary magazine known for publishing important (and often times controversial) modernist poetry and fiction, Weaver was a wealthy feminist and socialist first convinced of Joyce’s genius in 1914 when, through her support, the magazine serialized A Portrait of the Artist as a Young Man. Weaver financially supported Joyce and developed the London based Egoist Press to publish A Portrait of the Artist as a Young Man, which she would do once again with a new edition of Ulysses intended for distribution in England. In October of 1922 the second printing of the book was printed by John Rodker on behalf of the Egoist Press.
This edition (which can be seen in the picture) was limited to 2000 copies and printed on handmade paper. Unable to make corrections to the printing plates, the item includes an 8-page list of errata citing 201 corrections. Understanding there may be legal action taken against Ulysses in England, Weaver and Rodker smuggled books for booksellers to distribute under the counter and into the United States under the false title, The Complete Works of William Shakespeare. Despite the efforts taken to get Ulysses into the hands of adventurous readers it is estimated that US customs authorities seized and destroyed between 400-500 copies. Joyce’s Ulysses continued to battle censorship on both sides of the Atlantic until 1933 when Random House successfully petitioned the US courts to overturn the ban. However, the early printing difficulties resulted in a tumultuous publishing history fraught with errors, inconsistencies, and burned books.
Despite the challenges, the work went on to define the modernist literature movement and to this day people around the world celebrate Bloomsday on June 16th to celebrate the author and the infamous novel. 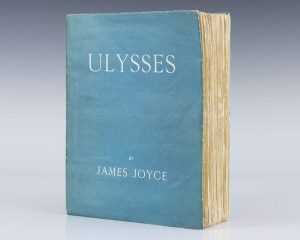